Boys’ Soccer Does it Again!

They have done it again!!! Both the elementary and middle school soccer teams brought home the championship!

As for the middle school boys soccer team, the phrase “utter domination” may not be strong enough!  Not only did the boys go undefeated this year on their way to the championship, but they fought through injuries and illnesses all through the playoffs.

Their performance was inspired and a true team effort as they defeated Parkridge Christian 16-3.  That is not a typo….16-3 was the actual score! The victory capped off another memorable season and marked the third year in a row that the middle school boys go undefeated and bring home the trophy.  Awesome job Seahawks! 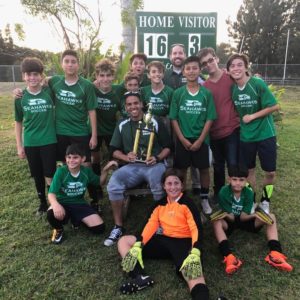